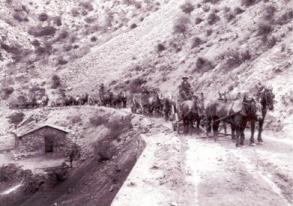 The first mineral discoveries in the Clifton-Morenci District were made around 1856 when a group of California volunteers pursuing renegade Apache Indians came through the area and wrote about the colorful mineral outcrops. In 1872 a group of soldiers from New Mexico were seeking renegade Indians, among the group were Joe Yankie, Robert and James Metcalf. They later returned to the area searching for placer gold. Although very little gold was found, they located the Longfellow, Arizona Central and Metcalf claims which later become the mines around the town of Metcalf and Morenci.

Two mining companies were organized in the Clifton-Morenci District in the early 1870's; the Longfellow Copper Company (which later became the Arizona Copper Company) and the Detroit Copper Company (later became Phelps Dodge, Morenci Branch). The first ore mined from the Longfellow mine assayed as high as 80% copper, and averaged 20% copper over the first 10 years of mining. The first copper furnace was built in Chase Creek, about 800 feet below the Longfellow Mine so the ore had to be lowered by cable in ore cars. Horse and mule-drawn wagons transported ore before the coming of the railroad in 1879. They hauled in all supplies and carried out the limited amount of copper from the crude smelters. The wagons then hauled the copper to the railroads that carried them to markets as far away as San Francisco and Kansas City or Kit Carson, Colorado, which was the nearest railroad. 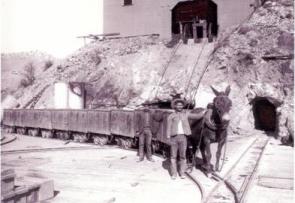 Although the ore contained very high copper grades, the early mining in the district had three major problems. The early smelters lasted only a few weeks (sometimes only days) before they had to be rebuilt. The transportation costs of the ore from the mine to the smelters, to the railhead for delivery and then to the market were expensive and often unreliable. The constant threat of Indian raids often caused temporary production losses.

Early mining by the Detroit Copper Company ceased after a short time because of the dangers of Indian raids and the remoteness of the mines. It was reactivated a few years later with the arrival of William Church. In 1880, Church decided to build a smelter to handle the ore from his mines. He didn't have the required capital, so he went to New York to seek a loan. On a historic day in 1881, Church entered the office of Phelps Dodge and Company in New York City and asked for a loan. Phelps Dodge at this time was not in the mining business, but rather involved in exporting commodities such as cotton, and importing metals, primarily tin, copper, brass, and zinc. Phelps Dodge did not immediately extend the loan, but asked Dr. James Douglas, a renowned metallurgist to examine Church's claims. Douglas reported favorably and recommended that Phelps Dodge invest in mining properties in Bisbee, Arizona that same years. Because of Douglas favorable report, Phelps Dodge and Company advanced $50,000 to Church and became part owners of the Detroit Mining Company. The year 1881 thus became the year Phelps Dodge entered Morenci and began mining copper. 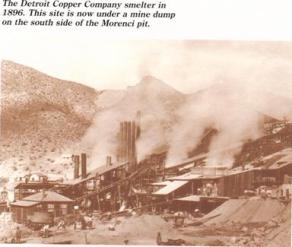 In 1882, the Detroit Copper Company smelter was shut down because an Apache Indian raid killed several workers, stole the supplies and left the smelter riddled with bullet holes. Because of the difficulties with the Indians, the high cost of ore transportation to the smelter in Clifton, the smelter was relocated in 1883 closer to the mining in Copper Mountain. As part of the move the name "Morenci" was given to this new area, replacing the old name of "Joy's Camp".

In 1892, the Detroit Copper Company was forced to shut down because the price of copper dropped to six cents per pound. An attempt to start back by building a concentrator to handle lower grade sulfide copper ore was unsuccessful. In 1897, Church sold the remainder of the Detroit Copper Company to Phelps Dodge and Company for $1,600,000. Underground mining was renewed, a new concentrator was built and the Company again prospered.

In 1921, Phelps Dodge became sole owner of the entire mining District through its purchase of the Arizona Copper Company which had been the largest copper operation in the Clifton-Morenci District since 1882. Most of the ore mined by the underground methods after 1921 was sulfide copper ore from the Humboldt Mine and assayed 2% to 4% copper. By 1928 and 56 years of operation, the Morenci district had produced almost two billion pounds of copper.

Between 1928 and 1930, Phelps Dodge drilled many test holes in the "Clay" deposits. Although huge tonnages of ore were indicated, the grade of the ore was too low to be mined profitably by underground methods. In 1932, all underground mining ended in Morenci because the depression had dropped copper prices to less than six cents per pound.

In 1937 mining was again started in Morenci, not by underground methods, but rather by open pit methods. Stripping of waste from the top of the ore body lasted until 1942 when the first ore was delivered to the new Morenci concentrator and a new era of mining in the Morenci district began.